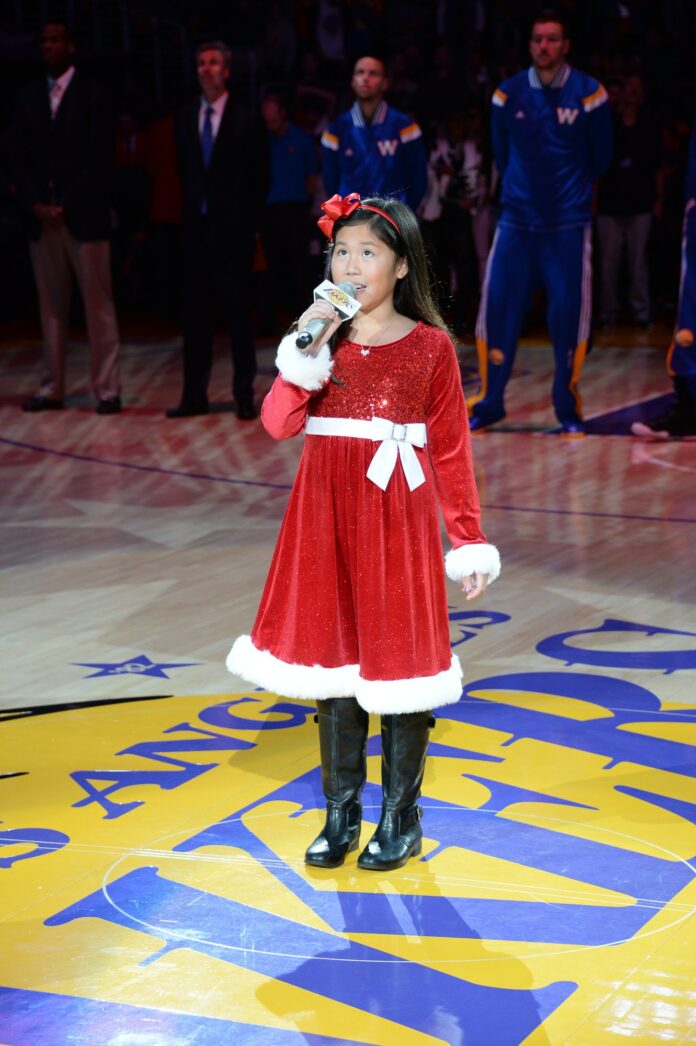 Valentine Elementary School’s very own Chelsea Chiu recently returned to Staples Center to give an encore performance of our National Anthem before the Los Angeles Lakers squared off against the Golden State Warriors on Wednesday, December 23.

Although it was her second go ‘round, the experience was no less frightening than her first experience – a pre-season contest that was held in October.

“It was really nerve-wracking because there were a lot of people. It was really really scary,” remembered the Viking. “My stomach was in a bunch of knots.”

Knots and all, Chelsea soldiered on and gave a riveting performance to the delight of the 19,000 sports fans in attendance.

“I thought it would be easier because it was my second time,” she recalled. “But I felt better that day knowing they enjoyed what I was doing for them.”

Also, making her second appearance special was the fact that she overcame a morning cold on the day of the game.

“She has a strong talent in singing, and we’ve decided to fully support her,” said Chelsea’s mom, Cecile.

That talent first brought Chelsea to Staples Center in October for a preseason matchup that also took place before the Lakers met the same division rival Warriors. Cecile began to pitch Chelsea’s talents to the Lakers at the beginning of the year – well before their season started. The Lakers were so delighted with Chelsea’s performance in the fall that they called her back for their Christmas home game in December.

And they’re not the only ones. Chelsea is slated to be  a featured soloist for the Filipino American Symphony Orchestra in spring, 2015 where she will be singing ‘Tomorrow’ from Annie as Annie. She will also be a part of the Sound of Music as one of the von Trapp children.

Chelsea recently filmed a small commercial for the Americana at Brand and Sprinkles cupcakes for a commercial to air on Asian network nationwide. She has also joined the Mattel toy company for an upcoming music project for the American Girl Doll. Chelsea is scheduled to sing the National Anthem once again at Staples Center on February 16 when the Stanley Cup champion Los Angeles Kings face the Tampa Bay Lightning in NHL action.

Chelsea, a third grader,  turns 10 in February and began her singing career in small choirs and summer theater programs before more formal training a couple of years ago. She also studies choreography for the songs that she is learning at PopRock Academy in Alhambra.

In addition to singing Chelsea also enjoys acting, and – wouldn’t you know it – watching sports with her family, which she has been able to do at Staples Center following her performances. Her father Jeff, Cecile and younger brother Julian are quite proud of her accomplishments.