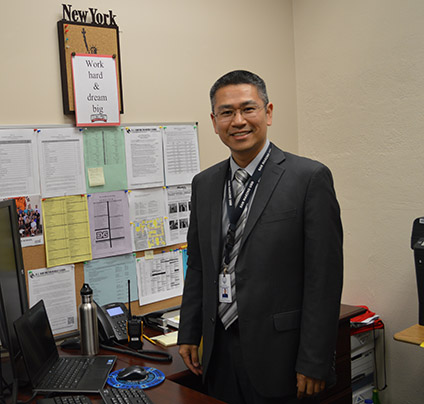 It is believed that Lin will be the first Asian American to head one of the SMUSD’s schools.

Lin was recommended by district Superintendent Dr. Alex Cherniss and was chosen out of a pool of 41 candidates.

Cherniss said he’s been really impressed with Lin this past school year.

“He came to us highly recommended and it took very little time to understand why,” he said. “Michael quickly established a rapport with the staff at HMS and gained their respect. The parent community also raved about his dedication to his job and to the students. I expect the Carver community to feel the same way.”

“He has the depth and breadth of experience that we thought would make him a great fit for Carver school,” School Board President Nam Jack said. “He had been an elementary principal, and he had done a great job as the assistant principal at Huntington Middle School. He had also been the director of technology at Temple City. We’re very excited to have him begin his tenure at Carver School.”

Lin said he was “absolutely thrilled” about his new position, which he will begin on July 1.

After working for the San Marino Unified School District for 38 years, Hollingsworth announced on April 12 that she planned to retire. She was principal at Carver Elementary School for 21 years.

Lin said he’s humbled to be replacing someone with such a successful tenure.

“She leaves behind a positive climate and legacy,” he said. “It’s a true honor to follow in her footsteps.”

Lin, who is a New York City native, joined the SMUSD this past school year and called the school district “fantastic.”

“We have four stellar schools here,” he said. “It’s a very tight-knit community with very supportive parents. We have a district office that is amazing and so are our students, schools foundation, PTA parents, families and the city in general.”

Before working at HMS, Lin was employed by the Temple City Unified School District since 2008 as an administrator, serving in such roles as curriculum coordinator, La Rosa Elementary School principal, principal for special projects and director of technology. He also has taught at Mark Keppel High School in the Alhambra Unified School District and School of the Future charter school in New York City. Lin obtained his bachelor’s degree in engineering from The Cooper Union for the Advancement of Science and Art in Manhattan and earned his master’s degree in business administration and computer information systems from the Zicklin School of Business. He also has a sixth-year degree in educational administration from California State University, Dominguez Hills and is seeking his doctorate degree from Azusa Pacific University.

After losing a former colleague and friend in the terrorist attacks of Sept. 11, 2001, Lin changed his path and decided to pursue a career in education to make a difference in the world by teaching young people.

Lin lives in San Gabriel with his wife, Cynthia, and daughters Lydia, 10, and Joyce, 9.