They have not, do not and will not profit off the information and made it very clear that all references to specific locations should be kept private, but a couple who formerly lived in San Marino claim their former home was haunted.

Jimmy and Jen, not their real names, moved into a home in the general vicinity of Lacy Park and raised a family before relocating to another Southern California community.

But multiple supernatural experiences still “haunt” the family, but not in a sinister way.

“People would ask us aren’t you afraid?’” Jimmy recalled. “I said no, I just wish we could teach them to do laundry and clean the house.”

Others might feel differently. Both Jimmy and Jen clearly recall one of the more vivid hauntings.

“It was 9:30 one summer night and our son had a friend over to swim,” said Jimmy. “I was in the master bedroom and I heard some screaming. I ran out to the pool and my son’s guest was scared and was screaming. He said he saw a man walking next to the pool and that he disappeared into some bushes. I went over and pulled the bushes back and showed him a three-foot high retaining wall that was topped by a six-foot high fence. He was totally freaked out.”

Jimmy said the guest described the unwelcome interloper as being tall, well-dressed in black and adorned in a stovepipe hat, very Lincoln-like.

“He said the man looked straight ahead and was walking like the Keep On Truckin’ guy,” Jimmy said, referencing a pop culture figure from the 1960s. “And this was before the movie.”

Jimmy is referencing the popular film Men In Black, which addressed the phenomena. The figure seen by the swimming pool—tall, male, dressed in black and wearing a stovepipe hat—is one of the more frequently reported apparitions. Jen also saw the same figure in the courtyard of the home. 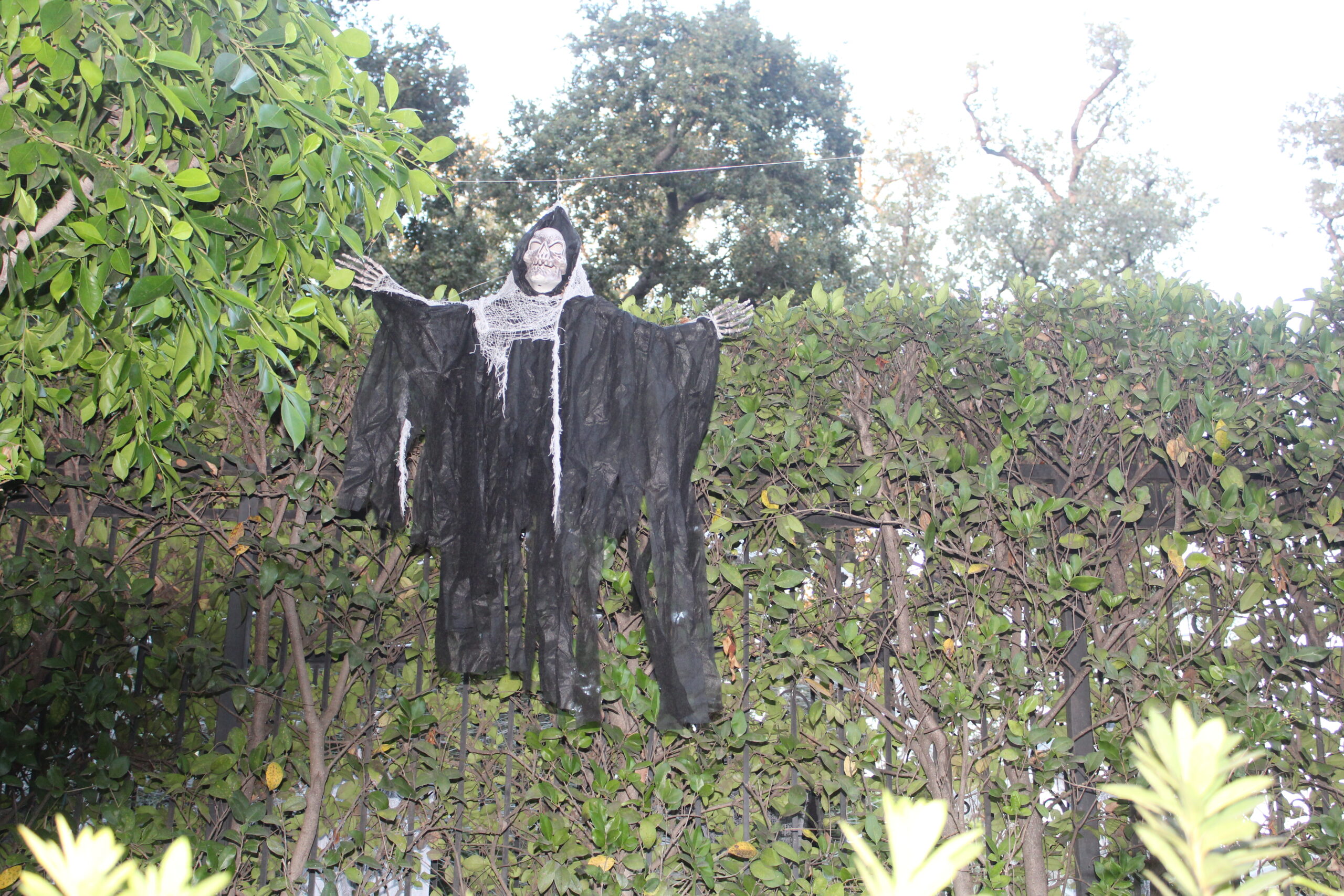 “I saw it,” she said matter-of-factly. “It had on a black cape and a tall hat. But it was a funny ghost, never a threatening ghost. It liked to do fun stuff.”

But many of the incidents were less threatening.

“I was in the master bedroom again one night when when all of a sudden a very strong wind came up,” Jimmy said. “I looked out the window and could see the trees rustling. Then all of a sudden. We had lights that lined our driveway, almost like an airport runway, and they started going on and off, but not all at once. It was one after another, in a pattern. I was thinking ‘this is weird.’ The next day I had our electrician stop by top check things out. He said that there was no way this could happen. That they weren’t wired in a fashion that would allow that to happen.”

The electrician couldn’t provide a solution, but he did give a suggestion.

“On the invoice he wrote ‘Ghosts!’” Jimmy said with a hearty laugh.

One Thanksgiving, Jimmy and Jen invited about 40 friends and family members over for dinner.

“The television in our bedroom, which was near the kitchen, kept going on and off by itself,” Jen said. “I kept turning it off, I would walk away and it would go back on. It became a joke. I have a photo we took that day of a bunch of us sitting on the bed with the television behind us.”

Word of the supernatural activity spread through the community and some neighbors told a former San Marino resident about the situation. “Florence,” also not her real name, had previous experiences with a group at UCLA that had conducted experiments in parapsychology during the 60s and 70s.

Jen said “the biggest thing we were ever told” was that the Old Mill once housed Native Americans who were forced to work against their will.

“Florence told us that there was once a tunnel that ran from the Old Mill in which a young young girl had died while tying to escape,” Jen told The Tribune. “I don’t know how true it is or if there is a correlation.”

“We’re not aware of any tunnels, anywhere,” Old Mill Executive Director Cathy Brown said in an upbeat tone. “There are a lot of legends about the Old Mill, but we arte not haunted.”

The family eventually relocated to another home in San Marino for other reasons before leaving the city many years ago. Jimmy said that during times their former home was unoccupied, his children would drop by for a visit, but without further incident.

It wasn’t until later, however, that during a retrospective discussion about their old home, a daughter reported she had sensed a presence of other people in the downstairs bedroom, and a feeling as if someone was sitting on her chest, or shoulders, trying to keep her from getting up.

Longtime community members told Jimmy and Jen that the location of the home was a popular destination for kids to make late-night jaunts, and that there were rumors it was the location of an animal sanctuary before the home was constructed, but those stories are also unsupported.

“It was a very strange property,” Jimmy concluded. “It had a totally different vibe.”