HomeSportsWater Warriors Hoping to Race Past the Competition
Sports

Water Warriors Hoping to Race Past the Competition 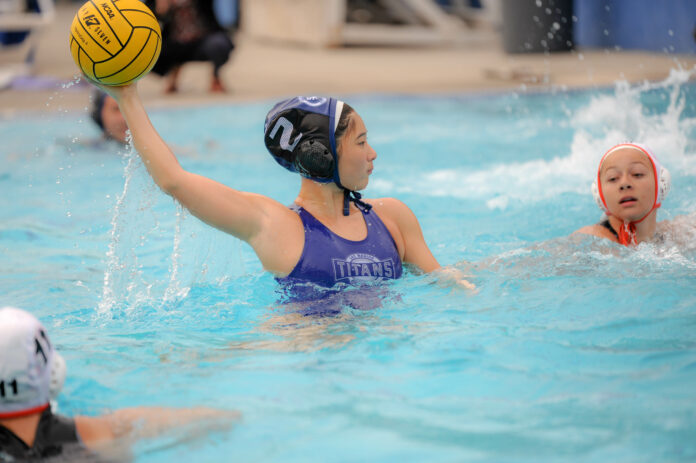 He’s the dean of San Marino High School coaches, but even Mark Barr isn’t immune to the graduation bug that has bitten just about every sports program on campus. Barr has been the head coach for every single girls’ water polo game since its inception 21 years ago and saw a substantial exodus at graduation six months ago.

But a little thing like roster depletion won’t deter Barr, whose relentlessly positive attitude continues no matter what the circumstance.

“Well, actually I thought be might have somewhat of a drop-off losing as many seniors as we had last year, but we are actually moving along pretty well,” said Barr, who came to San Marino High School in 2016 to coach swimming and water polo. “We lost two very solid players in Annette Aladefa and Marika Brunochelli, but we are finding ways to fill in and I like the direction we are headed.”

The Lady Titans finished fifth in the Rio Hondo League a season ago, but based on a solid non-conference schedule qualified for the CIF playoffs, where they suffered a first round overtime loss.

But that’s old news, and anyone familiar with Barr’s work knows he is deeply rooted in the present.

“If I had to put it on one thing, we brought back a good core of the team,” Barr said about the Lady Titans’ 5-3 start. “But what is making us solid is how well junior Hannah Collazo is doing in the set position. She plays the spot well enough to where the other players are able to play their more natural positions and that makes us much better from a team standpoint.”

The “set” position in water polo is tantamount to a center or post player in basketball, a player lined up near the goal to whom the ball can be passed for either a shot or distribution. Collazo’s skills have allowed San Marino’s offense to hum sufficiently enough for the Lady Titans to have recorded an 18-3 win over Alhambra earlier this week as well as landmark victories over Burroughs (11-0), La Salle (15-2) and Hoover (8-5).

But water polo requires a true team effort and Barr has a small, but solid roster. Senior two-meter defender Ashley Mao has stepped up nicely.

“Ashley is filling Marika’s spot and doing it well,” Barr explained. “Ashley is a technical guard, more so than a physical guard and she is very skilled at that position. Currently, she is leading the team in steals.”

“Sarah has picked up right where she left off last year,” Barr said. “She was a pleasant surprise last year as a scorer but this season she is playing good defense, too. She is second in steals behind her sister.”

Sophomore Isabella Lee is a utility player, someone who can play all the positions in the pool.

“Isabella is benefitting from Hannah’s presence at set,” said Barr. “Isabella would be playing that spot but with Hannah there, Isabella can play on the perimeter where she is a much bigger threat. Isabella has 12 goals, making her the second-leading scorer on the team.”

“Elizabeth is our team leader,” said Barr. “She is by far our most consistent player. She can play every position and she also has an even temperament, which has a profound effect on our team. Elizabeth keeps us emotionally balanced.”

The aforementioned Hannah Collazo, a junior, starts at set.

“Hannah for the first half of the season has been our biggest bright spot,” said Barr. “She has put in so much work and it has really paid off. She is leafing us I scoring with 20 goals and shooting 60%, which is outstanding. Other coaches are now starting to double team her, but Hannah is able to find the open player and that opens up our outside shooting.”

“Katelyn does a great job of backing up Hannah,” Barr said. “She does not make a lot of mistakes and that allows Hannah to get some rest and other girls to move to different positions. If she just comes into the game and keeps everything even, that actually helps us a lot.”

“Ashley is 5’9” and very aggressive,” Barr exclaimed. “We brought her up to varsity and she has really held her own. Ashley just gets better every day. For a young player guarding the other team’s set, she doesn’t have a lot of ejections. Few young players can pull that off.”

Driver Cassie Liong, another freshman, plays a key role in the substitution rotation.

“Cassie is usually our first player off the bench and for a freshman, she has really good speed,” Barr said. “She is also aggressive. With every game, Cassie is starting to push a little bit more. This allows us to get our starters a little rest.”

Liong had four steals, a goal and an assist in the Lady Titans’ win over Alhambra on Monday afternoon.

Goalkeeper Jasmine Lau, a senior, has steadily improved since taking up the sport as a freshman.

“Jasmine has been a goalkeeper since her freshman year and last year was a breakout year for her,” Barr noted. “She has continued improving through this season and has also become a threat to shoot, which is a great asset to have in a goalkeeper.”

Lau is blocking opponents’ shots at a 45-50% clip for the season. “When you can block that many shots, you are really allowing your field defense to play more aggressively. Jasmine gives us that luxury.”

Rio Hondo League competition—which has approached the status of water polo royalty in recent years—will provide anything but “luxury,” and the Lady Titans

Might need to hope for a repeat procedure to make it back to the playoffs.

“La Cañada is still far and above everyone else,” Barr told The Tribune. “They have a lot of seniors who are club players and so all of that experience is at its apex. After that, Temple City, South Pasadena, Monrovia and us will be battling it out. We might be able to match up with some of the teams. We played well against Temple City in our league opener.

That’s right: more than a week before Christmas and San Marino has already played a league game, the earliest start ever as the CIF rollback impacts the winter sports season.

With a young roster, Barr will have to take a fresh tack on the course towards success.

“We may not be as big as other teams in our league, but we can stay with them speed-wise,” Barr concluded.