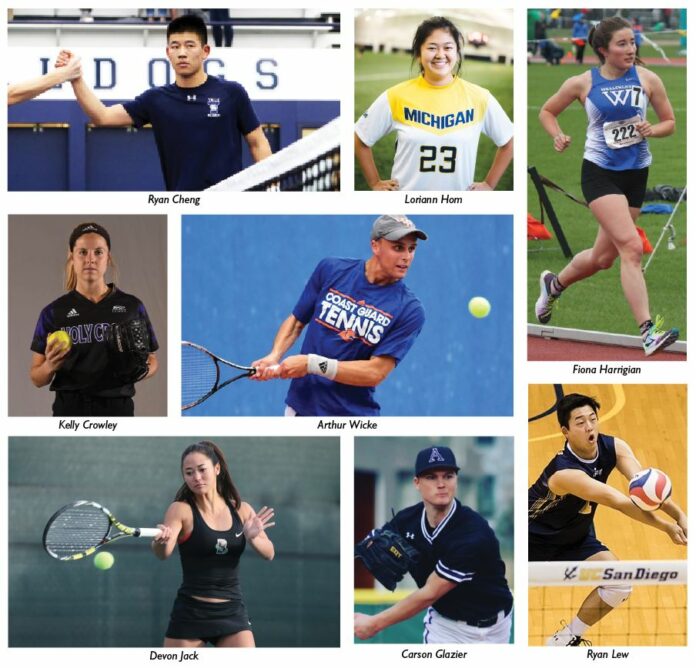 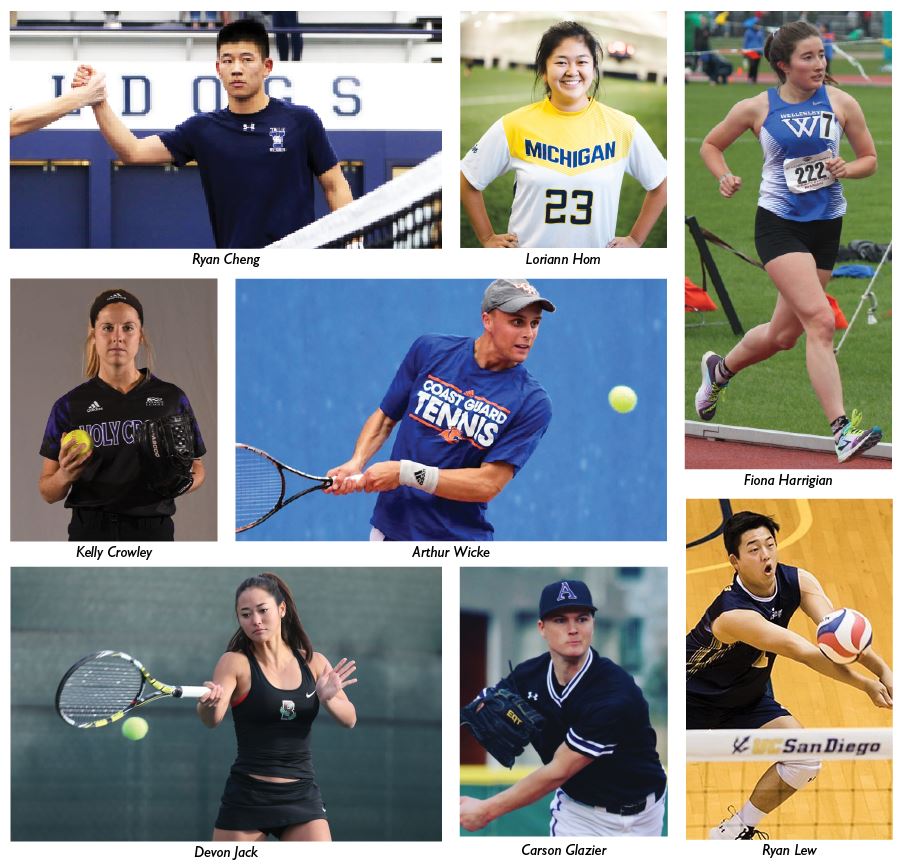 Often overlooked during the pandemic are some of the college spring season athletes who lost out on their swan songs. These eight members of San Marino High School’s graduating class of 2016 were all forced to leave their respective campuses before a satisfying end to their athletic careers.

Arthur Wicke
Tennis, U.S. Coast Guard Academy
Wicke can take solace in knowing that he won the final match of his collegiate career, one that clinched a team victory over Millsaps College during a spring break trip to Florida shortly before the lockdown.
“It is definitely disappointing not being able to finish the last year of college athletics on my own terms,” said Wicke, a captain for the Bears who ended his career with 61 wins while twice qualifying for the ITA Regional championships.
A civil engineering major, Wicke is headed to United States Coast Guard Cutter James in Charleston, South Carolina, where he will be assigned as a deck watch officer. The academy will hold a virtual graduation ceremony on Wednesday, May 20.

Carson Glazier
Baseball, Amherst College
Glazier quickly pivoted last year when his football career came to an end, joining the Mammoths’ baseball program, where San Marino High School’s career passing leader joined the pitching staff. When the season was canceled this spring, Amherst quickly scheduled a final game against rival Williams College.
“Everybody, including our family, friends, coaches, administrators and professors, did what they could to make the game special for us and I will always be grateful for getting to play a final ball game,” said Glazier. The game ended in an 11-2 victory for the Mammoths “and a big celebration,” according to Glazier. “Although the fact that we were being sent home loomed over us, it was one of the best days of my life.”

Devon Jack
Tennis, Brown University
Jack was seemingly in top form when the plug was pulled on the 2020 campaign, the Ivy League being the first to call off the spring sports calendar.
“When I found out about my senior season being cut short, I was devastated,” she said. “I have experienced every emotion — from sadness, to anger, to being convinced it just wasn’t real. But during this process I have learned that life is about perspective.”
Jack will graduate on May 27 with a degree in psychology, then begin working as a management consultant for PricewaterhouseCoopers in New York City.
“Throughout the past four years, I have come to realize that tennis at Brown is so much bigger than any one person,” Jack said. “It is about the hard work and dedication that goes into the blood, sweat and tears, and the person it shapes you into. While I wish that I could have the rest of my season back, I wouldn’t trade a minute of the last few years for anything.”

Fiona Harrigian
Track & Field, Wellesley
Also a member of the school’s cross country team, Harrigian competed in the 1,500-meter run and the 5- and 10-kilometer events for the Blue and had this year even added the javelin to her resume.
“I chose Wellesley for its beautiful campus, science center, and impressive almunae,” Harrigian said. “An added bonus was that I could maybe try out for the Wellesley cross country and track and field teams.” She accomplished that, and more. She is still “quite sad” about the abrupt ending to her senior season, and the biological sciences major will begin a job search while considering graduate schools.
“This strange experience has reminded me to appreciate my health, to not take time with friends and family for granted, and to go running after my goals, sometimes figuratively,” said Harrigian, who took part in an informal graduation ceremony on campus with friends on March 12 before heading back to San Marino. Wellesley will hold virtual commencement ceremonies on May 31.

Kelly Crowley
Softball, Holy Cross
Oh, the irony. After considering a tryout with the Crusaders’ softball team, Crowley, a four-year star on the soccer pitch, earns a spot on the team as a senior only to have the season wiped out. But Crowley scored a run during the squad’s spring break trip to Florida, making her way into the school’s official books.
“I felt like I was finally getting my bearing with the team and was really looking forward to season getting underway,” she said. “More than anything, I was sad to have my time with my teammates cut short.”
A history major, Crowley is applying to graduate schools and staying in shape running the streets of San Marino.
“I didn’t envision my senior spring to pan out like it did, but I’m so glad I decided to go out for softball,” Crowley added. “Keeping my athletic career alive and getting to know the girls on team was a lot of fun.”

Loriann Hom
Ultimate Frisbee, Michigan
A soccer star at San Marino High School, Loriann Hom made a quick transition to a sport that encourages, rather than restricts, the use of hands. A captain, Hom says she has experienced “grief, frustration, anger, determination and gratefulness” since the season ended. The feelings were exacerbated last weekend, which would have been a trip to the national championships, which the team had missed out on by one game last season.
“Our motto this year was ‘Never done,’ but, suddenly, it just was and it was out of our control,” said Hom. “We said those two words at every practice and workout and even have it printed on the inside of our jerseys.” A pre-med organizational studies major, Hom is applying to grad schools where she can pursue a master’s degree in public health. Her team held a well-publicized graduation ceremony before leaving Ann Arbor.
“I sympathize with all the seniors who had an abrupt end to their college experience and were not able to finish their last semester the way they had hoped,” she said.

Ryan Cheng
Tennis , Yale
Though disappointed by the abrupt end to his senior season, Cheng’s “big picture” view is far more philosophical.
“At the end of the day, there are people around the world in far worse situations than we currently are,” Cheng said. “The fact that our biggest worry amidst a global pandemic is playing our sports for an extra couple of weeks really goes to show how fortunate we are in the first place.”
A psychology and pre-med major, Cheng will be finishing up pre-med courses online with UCLA this summer and then conducting research in New Haven, Connecticut.
“The plan is to take the MCAT next January and go to medical school with the goal of becoming an orthopedic surgeon in the long run,” he said.
Cheng said he learned valuable life lessons, and said that “each and every single tennis coach, strength coach and trainer I’ve had at my time at Yale has cared not only about my performance on the court, but also who I am as a person.”

Ryan Lew
Volleyball, University of California, San Diego
The global pandemic may have cost Ryan Lew a school record. A defensive specialist for the Tritons’ Division I volleyball team, Lew entered the season third on the school’s all-time dig list. A four-year starter and two-year captain, Lew excelled at the position called libero, a defensive specialist who, literally, plays by a different set of rules. He was named rookie of the year as a freshman and was tabbed MVP as a junior.
“I was shocked and disappointed,” said Lew when the season was shuttered. “It was an abrupt ending to an amazing season.”
The Tritons were ranked sixth in the nation with a 14-5 record when the curtain came down.
A human biology major with a minor in business, Lew is headed to Chicago, where he will further his studies.
UCSD will hold a virtual graduation with plans for an in-person commencement “when everything settles down,” according to Lew.