Totten Recalled as Creator of Tradition

Pasadena had its Balian mansion, the famed “House of 10,000 Lights”; upper Hastings Ranch had its distinctive look during the holidays with dozens of homes bedecked with Christmas; and just up the street, Southern Californians flocked to see the 50-foot deodars that every December were strung with Christmas lights. San Marino resident Marvin Totten thought it would be fun to give his neighborhood a distinctive look, too.

“Dad thought some 6-foot-tall, red and white candles would give Lorain Road a special appeal,” said Tracy Totten of his father. “Dad was in the steel business and wanted to give his street a unique look. He had a customer who made large steel tubes and knew where to get kerosene road flares. During the ’50s, Dad created the Lorain candles that are still lit during the Christmas season.”
Tracy Totten remembers the tradition well. Over the years, he personally repainted and repaired the candles to assure a fresh appearance each yuletide season. He’s not alone in his fond recollection of the family’s time in San Marino. The Totten family lived at 1265 Lorain Road for more than 50 years until Marvin passed away in 1997 at the age of 90.
“I remember helping paint the candles in our driveway way back then,” said Julie [Totten] Clymer, another of Marvin’s children. “I remember that there were specific instructions as to where the candle was to be placed and it was often my responsibility to light it in the evening. I suppose it was to be an exact time so the street came to life all at once.”
Dave Totten believes his father began putting out the candles in 1957, which was when he left San Marino for UC Berkeley.
The tradition waned and surged throughout the years as families relocated and the candles were broken, stolen or forgotten. Enter Lorain Road neighbors Connor Lee and Luke Aloe, who, as chronicled in a recent edition of The Tribune, rekindled the tradition in 2015 when Connor’s mother, Lisa Nguyen, discovered one of the forgotten candles in the family’s garage.

Informed of the historic candles, Luke and his father shopped for supplies such as metal tubes, paint and tiki torches so he and Connor could make kits for neighbors. The dynamic duo then took a wagon loaded with candle supplies to peddle from house to house. Some Lorain Road neighbors even brought out the candles they had from decades ago. Lee and Aloe, who both attended Valentine Elementary School at the time, circulated through the neighborhood between 5 and 5:30 each evening to light the candles and then again between 8:30 and 9 p.m. to snuff them out. As many neighbors have done for the 50 or so years the project has been in existence, homeowners were also asked to keep the candles in a safe place until the next year.
A mild incident with the flammable candles last year sent Lee and Aloe to the drawing board and a brilliant solution was forthcoming. To comply with local fire codes, Aloe and Lee purchased solar-powered, battery-operated devices that fit atop the traditional candles, flicker and can be programmed to begin and end illumination at a precise time. They no longer need to be snuffed out. The 42 new candles have been in operation for about two weeks without incident. 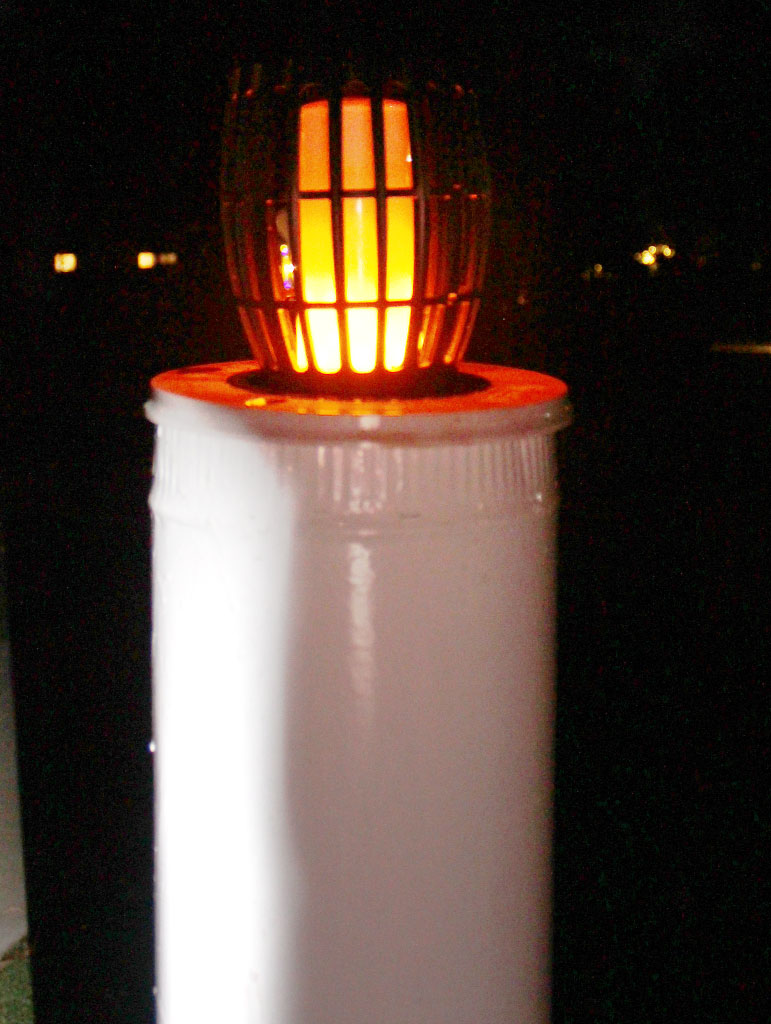 To acknowledge the industrious nature of the two young men, the San Marino Firefighters Association recently donated more than $800 to help bring the candles up to date.
“I am so grateful that the San Marino Firefighters Association was able to pay for the candle and electric tiki torch costs, instead of having this unexpected charge fall on the Lorain Road homeowners,” said Aloe, who is a sophomore at Pasadena Polytechnic. “The electric tiki torches look great, and again, I’m so thankful to the firefighters for their generosity.”
Lee shared his neighbors’ appreciation and enthusiasm.
“I thank the San Marino Firefighters Association for their donation,” said Lee. “This year especially, the candles have become a beacon of joy in the community, and I’m very appreciative for the firefighters’ selfless contribution to making the holidays a little brighter.”
Once again, Lorain Road has been placed on the list of “must-see” holiday attractions.
“Dad would be so proud that this tradition had been reignited so to speak,” said Clymer, speaking on behalf of many neighbors.