Robert Sherman Eldridge of Coronado passed peacefully at home on Tuesday, April 13, 2021. Bob was born May 6, 1927 to Samuel and Marion Eldridge in St. Petersburg, Florida. Bob spent his childhood in Boston then moved west to San Francisco, where he graduated from George Washington High School. He was proud to be the 10x-great grandson of John and Joan Tilley of the Mayflower. 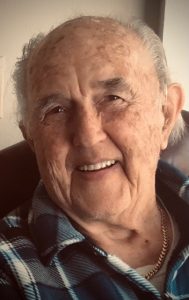 In 1944, he entered the Navy and served in WW II aboard the troop transport USS Pickaway. After the war he attended college at UCLA, where he played clarinet in the marching band. Playing in the band was one of his fondest memories, referring to it as his “claim to fame.”
After graduating he taught junior high school, worked as an arborist, and eventually found his calling as a probation officer in Glendale, California. It was there that he met the love of his life, Phyllis. Bob asked Phyllis if she

would let him take care of her. When she agreed, he said “There’s a hitch.” When she asked what the hitch was he replied “we get hitched”. They marked 50 years of marriage in February.
Bob retired in 1977 and they moved to Coronado Shores where they enjoyed playing tennis, golf, bridge and ballroom dancing. The community at the shores was really important to Bob. He often volunteered on various committees and events for their association. For over 40 years, Bob and Phyllis hosted an annual Scorpio party to honor those born under that sign. Family and friends would come from far and wide to celebrate. Bob often said that his favorite party was his 90th birthday, dining and dancing aboard the Hornblower as it cruised San Diego Bay.
Bob and Phyllis loved to travel the world. They even had framed maps of the United States and of the world pinning all their visits, which inspired tales of their adventures. He especially liked visiting the state capitol buildings, and historical monuments.
Bob is survived by his wife Phyllis, her sons Al and Tim, seven nieces and nephews, three grandchildren, five great grandchildren, and one great-great grandson. Bob’s family is eternally grateful for his devotion to Phyllis and for his kindness and generosity toward all. He had a long and wonderful life, and he will be greatly missed.