HomeCity NewsChiefs First on the Scene at Fire
City NewsBlocksFront-Grid 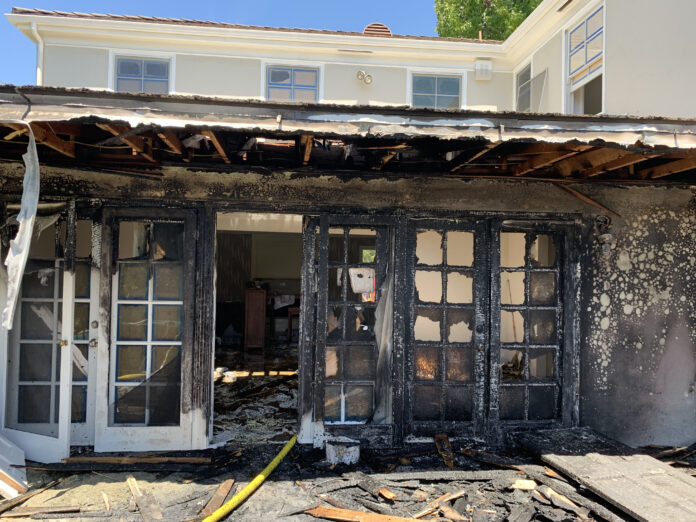 San Marino Fire Chief Mario Rueda and Division Chief Mark Dondanville responded to a house fire last Tuesday when they returned to the station shortly before noon after a morning of inspections.
Dondanville observed smoke in the area north of Huntington Drive. The two quickly reboarded Rueda’s vehicle and headed toward the rising haze on Ridgeway Road, where they encountered a 2,500-square-foot home that was ablaze. The two chiefs made sure the home was not occupied, then utilized their fire extinguisher and a garden hose to keep the fire in check until fellow firefighters arrived.
“The fire extinguisher in my vehicle is the most-used tool I have,” said Rueda afterward.

They were also able to direct firefighters from the Pasadena, San Gabriel and Alhambra departments as well as their fellow San Marino firefighters to ensure the fire was extinguished and did not spread to adjacent homes.
The firefighters worked in 100-degree temperatures to open up walls and the attic to fully extinguish the blaze, which was contained to the back portion and attic of the home.
The fire was investigated by the San Marino Fire Department’s arson investigators and is believed to have started in construction debris at the rear of the home. The cause of the fire remains undetermined and the damage is estimated at $300,000.
Rueda frequently suits up and joins the firefighters, most recently helping out at a fire that took place in the 1200 block of Roanoke Road shortly after midnight on July 28.