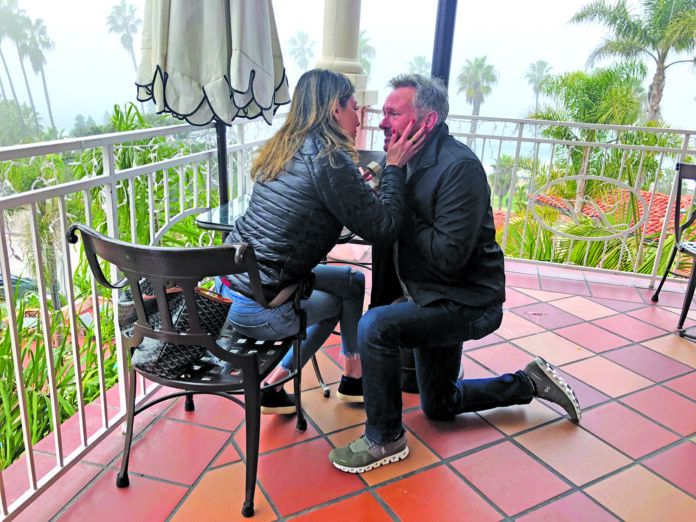 FYI, I’ve got thorns in my fingers from putting flowers on floats. Stupid thing, to spend three hours decorating a Rose Parade float that bites you back.
Best stupid thing I’ve done lately, by the way.
At the float decorating depot, the first tool they hand you is a giant corkscrew.
“Happy hour!” I yell.
Well, no. Actually, we’re to use the corkscrews to twist holes in the plastic foam skin of La Cañada Flintridge’s Rose Parade float, whose overall theme has something to do with mischievous raccoons making a mess of things … don’t they all?
Then, into the hole we slip a slim water vial containing a beautiful rose.
It’s basic dentistry, super simplified.
“Hey, kid, I got you some roses,” I keep telling Suzanne, repeating it till she laughs, which she never really does.
So, that’s how we welcomed the new year, at the float depot under a dank overpass: Roses. Glue. Freeway fumes. Haven’t been this high since college.
As you know, my life is mostly guided by impulse and indecision. Which is how I wind up 20 feet up on a parade float scaffolding. “We need 10 people who don’t mind climbing a scaffolding,” one of the supervisors says.
So there I am, me and Suzanne and her Cambodian exchange student, Jess, who has never seen a Rose Parade and is now with her own thorny fingers, helping to craft one.
What a life, huh? I’m like a poem that’s been hurled from a bridge, fluttering this way and that.
I’m an anachronism wrapped in an enigma wrapped in a fortune cookie.
There’s so much I don’t understand.

To this day, I don’t get the metric system, or protostars, or decaf coffee — how do they get the caf out?
I’m still not even sure how they make babies.
In general, I’m drawn to anything whose time has passed: FM radio, Jewish delis and angry Irish actors … wood bats, real breasts and Caesar salads with anchovies, served from tableside carts.
Tell me, what happens when everything you cherish goes extinct? You carry on, damn it. You smirk, you smile, you sing in the rain. You help build a Rose Parade float, pressing the tips of tiny thorns in your tender flesh. It’s faintly Biblical. All we’re missing is the snakes.
Despite the small pains, I find the world to be a mostly magnificent place. No, really. Even lately.
Take Suzanne. No, wait. Please don’t. What a light she’s turned out to be. What a terrific float builder.
And then there’s my 21-month-old grandbaby, Cakes, whom I just taught to do the three-point stance favored by most football players: butt down, back flat, ready to torpedo your opponent. Over the holidays, she’s really gotten the hang of this football stance. Go Cakes! Go Bears!
So, it is with a glimmer of hope and confidence that we enter 2023, which might turn out to be our best year ever. Or the worst year ever. We don’t know. Depends a lot on what the Fed does.
“There’s a new face at the door, my friend … a new face at the door.”
That’s Tennyson, of course. Fortunately, it’s the only Tennyson quip that springs to mind, though I do recall something he wrote about the new year, “cold and starry … blithe and bold.”
Speaking of blithe and bold, consider my pal Jeff.
Just before Christmas, Suzanne and I zoomed down to La Jolla, where we hid in the hotel veranda’s heavy velvet drapes while Jeff proposed to our beautiful friend, Lydia. Talk about stage craft. It was vaguely Shakespearean and lovely and amped.
“I’ll make my heaven in a lady’s lap … etc., etc.”
Down on one knee Jeff went, just like in the olden days. After he proposed, Suzanne and I jumped out of the drapes — SURPRISE!!! — snapped some photos, gushed over the rock, sipped some Champagne.
On the patio of a magnificent old hotel, we talk about how some people are “happy criers,” as Suzanne puts it — meaning they can look lovely and wonderful in tears.
I cried. Lydia (the happy crier) cried. Even total strangers smiled and clapped.
Why?
God knows. Could it be that — in a broken, thorny world — love still triumphs?
Naw. Yes! Naaaaaw.
Well, some things don’t change. A heart sparks, a man takes a knee, a woman loses her mind a little. Tears flow. Strangers applaud. A waiter serves imported French bubbles that tickle our sinuses.
So maybe 2023 is going to be OK after all. Maybe there’ll be a new face at the door.
Mazel tov!
Mazel to the max.