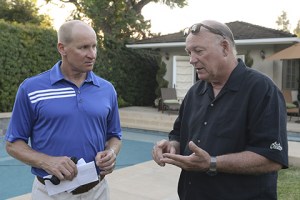 Facing the highest expectations in 20 years – which is, ironically, the last time the San Marino Titans won the Rio Hondo League football championship – head Coach Mike Hobbie told Boosters on Aug. 14 that he is “looking at the season one game at a time.”

“That’s the way we have to approach this season,” Hobbie told a hushed audience on a thankfully cool Friday evening. “It’s still going to be real tough for us. There are three new coaches in the Rio Hondo League and a lot of talent sprinkled about. Monrovia has received a lot of transfers – again – and they will be very strong. This is getting old.”

Hobbie seemed to take a fair amount of pride when he mentioned his “170-pound defensive linemen who will be going against 250-pound guards and tackles.”

“I know in my heart of hearts I give every kid a fair shot,” said the veteran coach, who once served as a Division I offensive coordinator at the University of South Florida. “I am a true believer in the competitive spirit of Americanism. I want your child to be successful and their safety, health and welfare is my main concern.”

Hobbie introduced his coaching staff, which has a few new members, calling them “excellent men.”

The coach, entering his fifth year, mentioned his lifelong passion for sports.