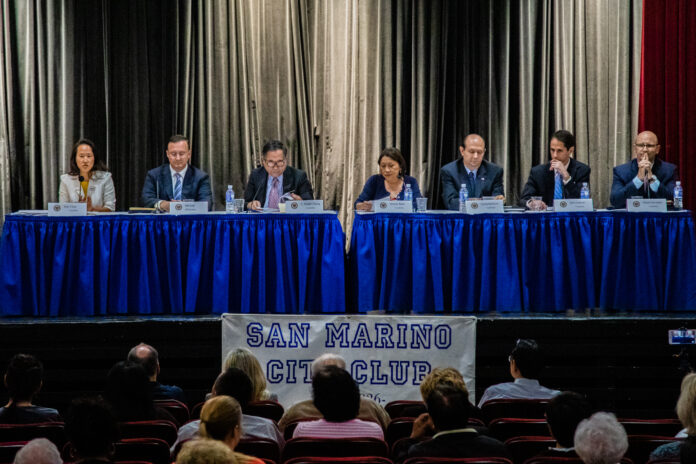 A local school official once joked that the San Marino Unified School District had been ranked #1 in the state for so long that bureaucrats changed the standards in an effort to get a different result.

It didn’t—and hasn’t—worked, as the SMUSD once again finished tops in California, based on data that was released in late September. According to the 2018 California Assessment of Student Performance and Progress, or CAASPP, scores, the San Marino Unified School District still leads the way.

Before CAASPP, the district had ranked first among the state’s unified school districts for a remarkable fifteen consecutive years due to its percentage of students meeting and exceeding state standards as reflected by the Academic Performance Index.

“San Marino students speak to the possibilities in public education that success is attainable by those who take advantage of every learning opportunity, and that there is a value in continually striving for academic excellence,” then-School Board President Shelley Ryan told The Tribune. “Congratulations to our amazing students, and to the families, the San Marino community, administrators, teachers, and support staff that work so hard to support them.”

It was a subject that monopolized the front page of The Tribune and conversation at local social events for more than six months when longtime School Board Member Chris Norgaard was suspended in late January while the San Marino Unified School District and the San Marino Police Department investigated allegations of improper conduct.

On Tuesday, June 5, Norgaard filed a federal lawsuit against top district officials and each individual school board member, claiming civil rights violations under the First and Fourteenth Amendments of the U.S. Constitution.

As quickly as the story burst onto the locale scene, it went away on September 26 when the two parties agreed to a settlement in which Norgaard received no financial compensation with no admission of wrongdoing by the defendants. The agreement included a code of conduct for school board members that specifically states that “board members can only shake hands when engaging school employees in all contexts.” The addition of this language directly addressed a topic that was raised in a district attorney’s declination of prosecution in a previous complaint against Norgaard, where a district employee claimed Norgaard had kissed her at a public event.

“The litigation that school board member Chris Norgaard initiated against the San Marino Unified School District, four of its board members, its Superintendent and Assistant Superintendent has been resolved and will be dismissed,” said a joint statement which was released with the settlement agreement.

On October 12, The Tribune reported that the SMUSD had received invoices from two attorneys totaling $484,992.87 to defend itself against Norgaard. The district received payments of $121,248.22 and $300,000.00 from the Joint Powers Authority which provides insurance services for multiple school districts. The balance of $63,744.65 was paid by the district.

3 Karen Lawrence Takes Over as President of The Huntington

Following what it termed “an extensive international search,” Karen R. Lawrence, former president of Sarah Lawrence College, was named president of The Huntington Library, Art Collections, and Botanical Gardens, the organization’s Board of Trustees announced on July 5.

Lawrence, who officially took over on September 1, is The Huntington’s ninth president. She joined The Huntington following 10 years as president at Sarah Lawrence, a small, liberal arts college in Yonkers, NY.

“Karen’s combination of qualities – her collaborative leadership style, unflappable nature, and strong scholarly background- convinced the search committee that she’s absolutely the right person to lead The Huntington at this time, especially as we gear up for our centennial and several major projects ahead,” Loren Rothschild, chair of the institution’s Board of Trustees, said in a statement.

Among the first significant projects Lawrence presided over were the ambitious conservation effort on The Blue Boy as well as the expansion of The Huntington’s renowned Chinese Garden, for which a ceremonial groundbreaking was held in late August.

“The Huntington represents so much of what I hold as core values- a humanistic approach that emphasizes curiosity, empathy, and aesthetic appreciation,” said Lawrence. “I am thrilled by this extraordinary opportunity, especially given the challenges facing the arts and humanities and the extent to which The Huntington contributes to knowledge making and the exchange of ideas, public enrichment, cultural analysis and a deeper understanding of what it means to be human.”

Lawrence holds her bachelor’s degree in English from Yale University, her M.A. from Tufts University, and her Ph.D. from Columbia University.

Lawrence replaced Dr. Laura Trombley, who abruptly resigned from the position on March 28, 2017 to write a book-length study of Mark Twain.

Dr. Steve Hindle, the W.M. Keck Foundation Director of Research at The Huntington, very ably served as acting president in the in the sixteen-month period between the two administrations.

It might be a stretch to say that a 17-year, four-term incumbent’s re-election could be considered an upset victory, but given the enthusiastic, often contentious climate surrounding the recent race for three seats on the San Marino School Board, the fact that C. Joseph Chang received the most votes might just be considered so.

Chang garnered 2,923 votes, or 22.63%, in winning his board seat for the fifth time. Fellow incumbent Shelley Ryan earned 2,317 votes (17.94%) in defending her seat and Corey Barberie outdistanced four other first-time candidates to claim the third post, which belonged to two-term Boardmember Nam Jack, who chose at the outset of the campaign not to run. Barberie gathered 1,884 votes (14.59%) to hold off Michael Killackey.

Possibly due to his extensive experience, Chang was humble in victory.

Chang also said he refused to run on his reputation and “worked harder than ever.”

“I think some people would have liked to see me retire, but I felt the need to stabilize the school district,” Chang told The Tribune. “It is my hope we can bring the community together.”

Leading up to the election, community groups attacked the district for what they considered a poorly planned proposed construction project as well as several academic issues, including college admissions and local homework standards, making the final numbers somewhat surprising to many voters.