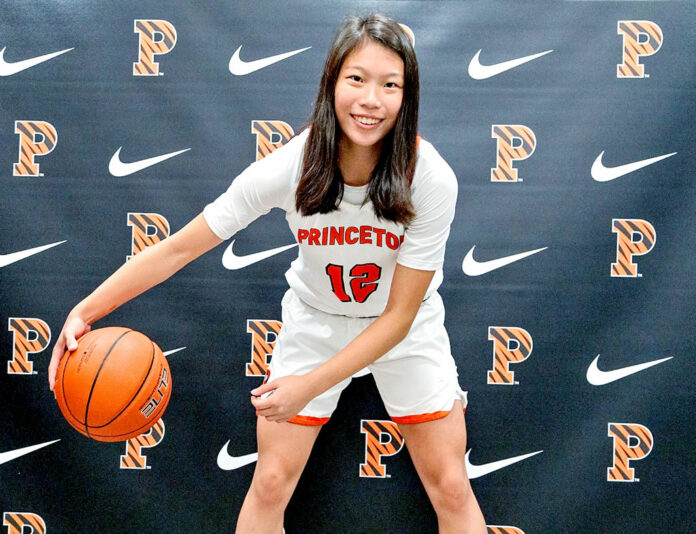 Her trophy case is already well stocked, but Kaitlyn Chen, a San Marino resident and recent graduate of Flintridge Prep, recently added what is perhaps a high school basketball player’s most coveted accolade when she was announced as the recipient of the John R. Wooden High School Player of the Year Award for California Interscholastic Federation Southern Section Division II.
The award is presented annually to the most valuable player in each Southern Section division and the Los Angeles City Section. Each player receives a plaque, and a check is given to the school’s athletic fund in the name of the late Wooden, the legendary coach who led the UCLA Bruins to 10 NCAA men’s basketball championships.

“Obviously, I am very happy,” said the humble Chen. “It’s such an honor to have been chosen. I didn’t expect it, as we didn’t do very well in the playoffs. But I am in great company. I have played against many of the other players in club basketball, and they are great.”
During her four-year varsity career, Chen scored a school-record 2,009 points and also set career highs in rebounds and assists. The Wolves went undefeated in Prep League action during her tenure while winning four consecutive championships. Chen was named to the all-section and all-league squads all four years and was named the Wolves’ and the Prep League’s most valuable player after her sophomore, junior and senior seasons.
The Wolves came close to winning a CIF championship in 2018, but lost a 50-46 heartbreaker to Beverly Hills.
Prep head coach Jayme Kiyomura Chan knew Chen was something special from the opening tip.
“Kaitlyn is definitely one of a kind,” said Kiyomura Chan, who co-coaches the team with her cousin, Kevin Kiyomura. “She’s adored by so many because of the person she is and the athlete that she is. The John Wooden Award is the pinnacle of awards for young athletes.”
While Chen’s individual accomplishments are legendary, Kiyomura Chan is equally if not more impressed with her other skills.
“Kaitlyn was never about the accolades,” said Kiyomura Chan. “She is extremely modest, and that’s really a joy. She became a captain for us as a sophomore and we saw a tremendous amount of growth with an ability to lead girls and earn their respect with the way she carried herself. I can’t tell you how many coaches told me with sincerity how special she is.
“Everybody at the next level has talent, but when you can have someone who is respectful, attentive, nice, joyous, silly and knows how to get the work done, you can’t ask for a better situation.”
When asked, Chen told The Tribune she didn’t have any individual statistics to provide for this story.
“If only we can have more kids like that, right?” said Kiyomura Chan. “She could score 40 points a night, but she never wanted to. She never asked me to look at the stat book in four years. Who does that? In my 25 years of coaching, I don’t know if I’ll ever have another quite like her.”
For Chen, it was always about the team.
“As a freshman, Kaitlyn had the talent to take over the program, but she did not,” explained Kiyomura Chan. “Being the person that she is and having respect for senior captains Renae Tamura and Taylor Yoshida at the time, she was happy to take a back seat and let them shine. That speaks to who she is. She knew her time would come.”
Her time will continue at Princeton, where the 5-foot, 9-inch guard will further her education and continue her hoops career.
“It came down to North Carolina, Cal and Princeton,” Chen said. “I’m super excited about going to Princeton next year. The team dynamic there is great.”
She said that attending Flintridge Prep was “one of the best decisions I’ve made.”
“Prep really embodies the community aspect,” Chen continued. “I know I’m always able to count on my friends, teachers and coaches.”
And they on Chen.
“We are so very proud of her,” said Kiyomura Chan. “Her teammates are proud and she’s proud of the fact that she gets to represent the school in this way. Our relationship with Kaitlyn is pretty special. She really bought into the whole philosophy that the program is a family, and we do everything for each other. Knowing her, she would say this award was for her teammates and all of Flintridge Prep.”
Chen went one better.
“I wouldn’t have been able to do any of this without my parents and coaches,” said the daughter of Sandy Shien and Yeh Ching Chen.